DJ EU’s sound represents a lifelong culmination of random but shaping experiences. Leaving Puerto Rico at 18 to pursue an engineering degree in Atlanta, Georgia, Eumir Gutierrez arrived to the South with ambition and determination to live out a steady and successful career. An optimistic attempt at the “American Dream,” if you will.

All he brought was a love for all types of sports – that originated from his native country – and a technical background and passion for music.

That well-measured pursuit however, would soon be flipped upside down thanks to a run of random luck and an opening of Pandora’s box: a harmless birthday playlist made for a friend’s party that would trigger an unprecedented run that is rapidly approaching its pinnacle as we speak.

Admittedly, Guitierrez went through a lot of growing pains during this time: learning the cold, hard truth about how difficult it is to start with amateur equipment, while also developing your own sound. But with a natural ability to be at the right place at the right time – thanks in large part to gaining a local following at the Opera Night Club – and presenting his work ethic and talent to the people that push culture in Atlanta, DJ EU soon became a household name.

This is when he truly “saw what the music industry was” and “immediately fell in love with it.”

When Atlanta United announced and launched its franchise with their first kit reveal at renowned local music venue, The Tabernacle back in November of 2016, Gutierrez was then a budding star in the Atlanta club scene looking to make his next step.

He still vividly recalls taking in the fresh energy of the fans and soon-to-be soccer club and becoming flooded with a conviction to not to miss out on a once in a lifetime opportunity.

So, for an entire year, he tweeted – in multiple languages – at the Atlanta United account in hopes of getting a shot. Soon enough – ironically unrelated to the tweets – DJ EU got an email before leaving for a vacation with an offer. It was the next step he had been preparing for and an offer he simply could not refuse.

As the second season kicks off in a few weeks, DJ EU will post up at his booth in the heart of Mercedes Benz Stadium, headphones hanging off one ear, turntables out front, with the overflowing energy of sophomore MLS fans creating one of the best, new emerging sporting environments in the country. You can expect to hear a diverse mix of sounds, ranging from the latest hip hop to crossover Latin hits, matching and setting the mood of a tight knit community ready to celebrate; the very core of what separates DJ EU’s sound from the rest.

But what you’ll see – if you look real closely – is a custom made, black, red and gold Atlanta United vinyl spinning and turning with each turn of DJ EU’s hands. A physical representation of the very foundation that DJ EU’s unpredictable career was built on: a playlist and a love for sports.

Blogging From Your Live Site & Mobile! 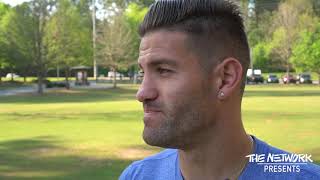